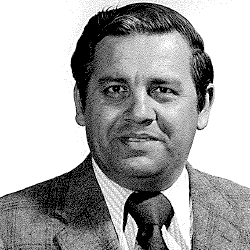 Dr. Rodriguez was born and raised in San Marcos, Texas. He graduated from San Marcos High School in 1948. He attended Southwest Texas Teacher's College where he was among the first class to graduate from the R.O.T.C. program. He enlisted in the U.S. Army but his tour of duty was canceled so he began teaching in the Edgewood School District in San Antonio, Texas. He graduated Southwest Texas State University with his Master's degree. He then served a tour of duty with the U.S. Air Force and later on, the Air National Guard. When he returned to Texas, he taught at Gary Job Corps and then secured a teaching position at Southwest Texas State University as a bilingual teacher. He earned is Ph.D. at the University of Texas and became the Director of Bilingual Education at Southwest Texas. Dr. Rodriguez was on the Southwest Texas faculty since 1971 until his retirement around 2001.

Dr. Rodriguez was one of the first pioneers to bring bilingual education to the San Marcos CISD. Most of the bilingual teachers that taught in San Marcos were taught by Dr. Rodriguez. Dr. Rodriguez taught the teachers how to educate the Spanish speaking children of
SMCISD through bilingual education. It is my honor to nominate Dr. Rodriguez as the namesake for the next San Marcos CISD campus. Dr. Rodriquez was instrumental in the development of my career as an educator. He guided me through the process as we designed and implemented a course schedule plan that would ultimately have me graduate with a degree in Bilingual Education. Dr Rodriguez continued to mentor and encouraged me to advance my education as I pursued and obtained a Masters Degree in Educational Administration. Dr. Rodriguez further impacted my life as I began my administrative career. To this day, I instill the qualities of integrity, accountability, and honesty into every day in my practice. He will forever be a part of the memories I cherish from my days at Texas State University. I am looking forward to seeing his legacy continued in this community for generations to come.

Dr. Rodriguez's contributions to bilingual education impacted many teachers, students, and curriculum from the elementary level to the secondary level. He was a member of the Knights of Columbus, sat on the Hays County Memorial Hospital board, later the Central Texas Medical Center board; he was a board member at Scheib Mental Health Center; he was San Marcos Rotary President, and on the Board of Directors for the Housing Authority. He also sponsored Southwest Texas State University bilingual student organizations during his professorship at the University including initiating the Bilingual Education Student Organization (BESO) and was a sponsor of the Texas Association for Bilingual Education (TABE) for over 30 years. In 1998, he was named the Editor of the State Bilingual Education Journal. This allowed him to inform the public-at-large of bilingual education. 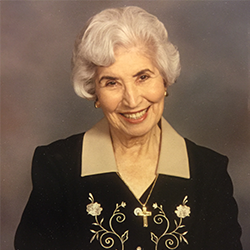 Soila Rodriguez was born in South Texas but made her way to San Marcos at what was then Southwest Texas State Teachers College, earning her Bachelor Degree in 1951, a Master Degree in 1955, and she also met her husband, Richard, a San Marcos native. She was an educator for 37 years, first teaching veterans returning from WWII at the old Bonham School, then in the Rio Grande Valley where she taught at Sharyland, McAllen and Pharr-San Juan-Alamo school districts. At PSJA, she started her guidance and counseling career. She was director of Upward Bound at (now) Texas State University, returned to teaching at San Marcos High School, was promoted to Assistant Principal at SMHS, ending her career at Lamar School where she served as Principal for 10 years before retirement.

Coming from a background of poverty, Soila Rodriguez' lifelong ambition was to be a teacher. She said she "enjoyed every day at school" and delighted in meeting former students. As an administrator, she earned the love of her faculty and staff because she always advocated for them and she created an environment where learning was paramount. She uplifted everyone, but especially women. She named the first female head maintenance worker at Lamar School. This woman was hesitant because she thought the male workers would not listen to her. Soila encouraged her because she knew she could do the job, and she did. At the end of the school year at Lamar, which was then only sixth grade, she hugged every student on their way out the door.

Soila Rodriguez encouraged many local students to further their education, through her work at Upward Bound, and later at SMHS. Many students would approach her years later and thank her for her support, encouragement and assistance in securing scholarships and student loans. One of her former students at Upward Bound is Emmy award winner John Quinones. To her, it did not matter what color your skin was, your background, your wealth, your status. What she instilled in her students was the idea that they could do anything they wanted to do if they had the commitment and desire. She proved that through her own life and she 'passed it on' through her life's work. 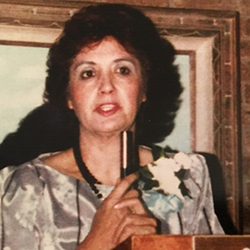 Velia Rodriguez Cavazos was a San Marcos native who graduated from SMHS in 1950. She received both a Bachelor and Master degree from Southwest Texas State College. She married Robert L. Cavazos and then spent the next 20 years traveling the world with her husband and the USAF. She was a counselor at the International School of Bangkok, Thailand for three years, and then spent 22 years as counselor at Goodnight Junior HS in San Marcos.

When Velia R. Cavazos received her Master's in 1956, she was told she couldn't teach in San Marcos. She left San Marcos because of her husband's military career and gained experience throughout the world before returning here and acquiring the position at Goodnight Jr. HS. She was a beloved counselor for the many years she worked there.

Velia R. Cavazos embodied persistence in a world where civil rights were somewhat slow to come to places like San Marcos. Her love for her hometown and her profession brought her back here where she could serve as a mentor and role model for the many students she encountered.