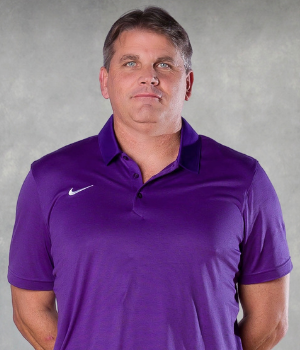 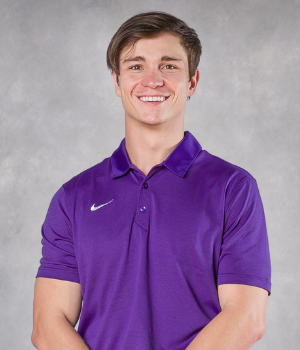 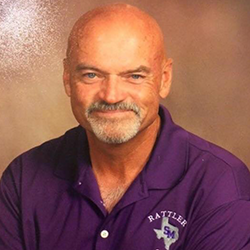 Coach Callender has been coaching golf at SMCISD since 2005.  Callender is a PGA Golf Professional and enjoys teaching junior boys/girls golf. Prior to coming to SMCISD, Coach Callender played golf professionally in Asia and South America after playing golf for Texas Tech University. Coach Callender was also a Peter Kostis Golf School Instructor is the Founder/Director of Down the Fairway Junior Golf Camps,downthefairway.golf. Golf is a sport that will last you a lifetime allowing the athlete to play for leisure or for business.

Bio:
My name is Kristian Cogdill and I have been coaching for 3 years all in San Marcos. I am originally from San Marcos and graduated from SMHS in 2010. After high school I played football for The College of St. Scholastica in Duluth, Minnesota for 4 years. After that I came back to Texas State to get my Masters in Secondary Education. 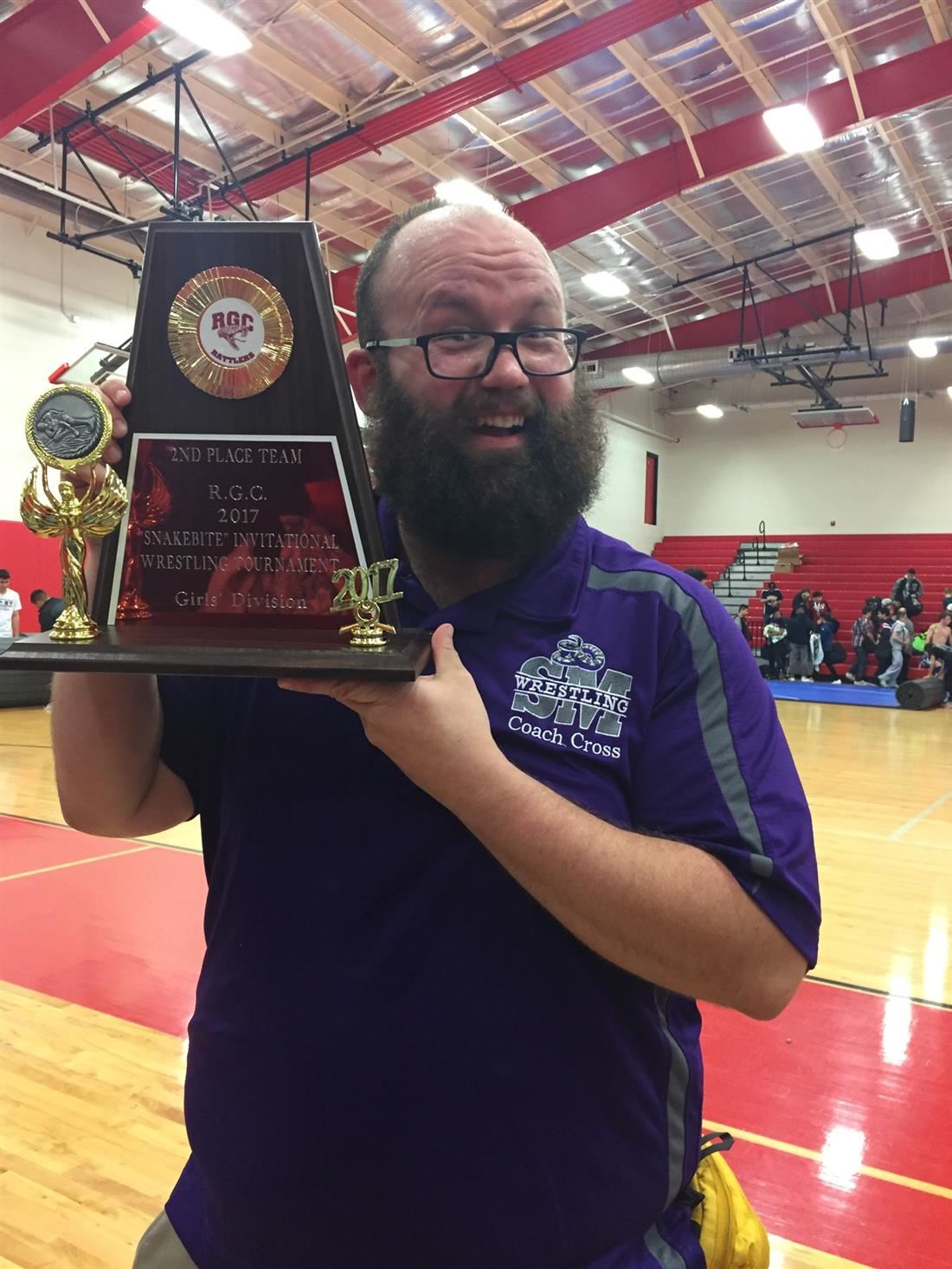 Graduated in May 2012 from Texas State University with a degree in Exercise Sports Science and Business Administration. 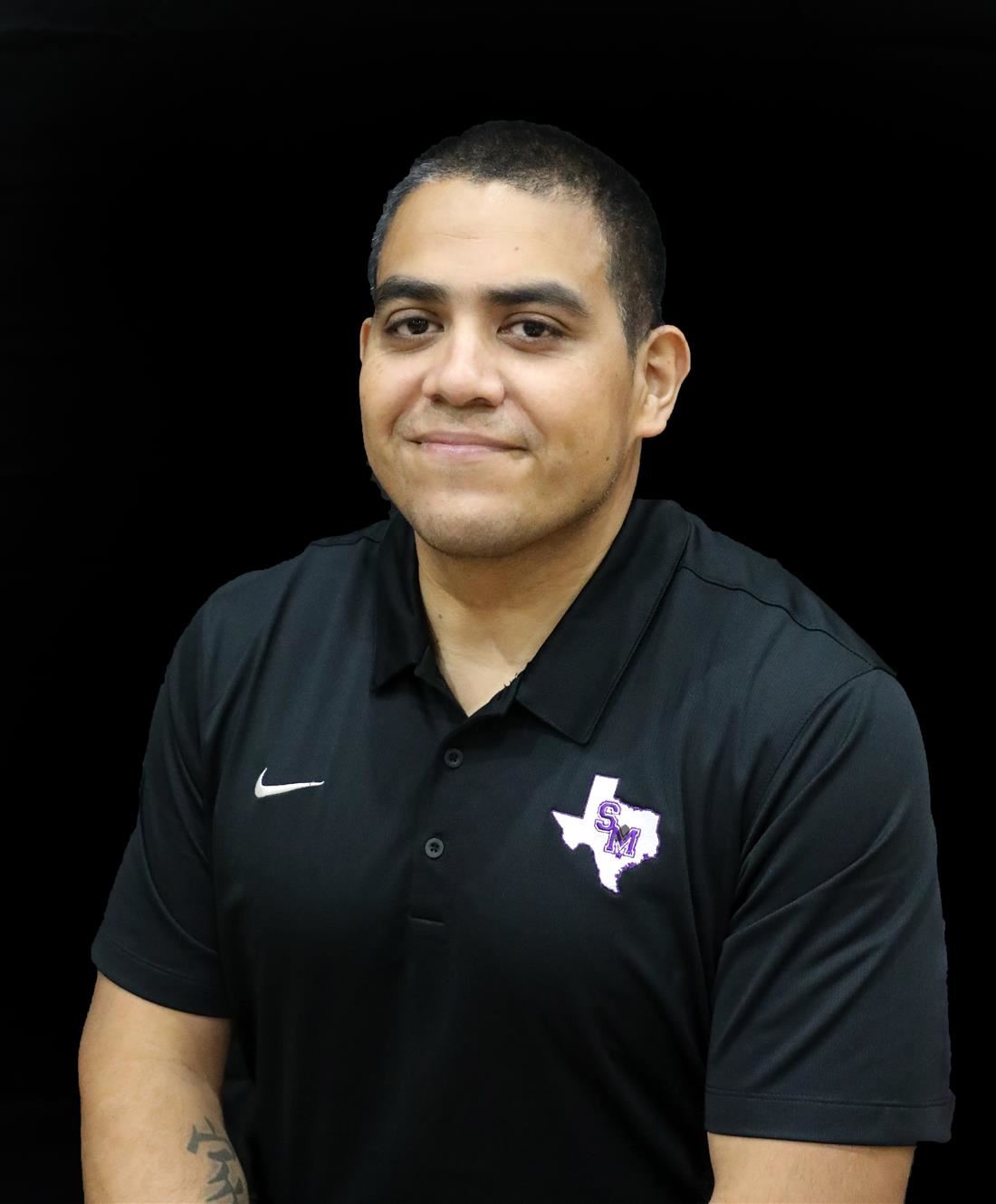 I am entering my second year at SMHS as an assistant baseball coach and pitching coach. It has been a fantastic experience working at SMHS and for SMCISD. I am lucky to be a part of a great athletic program and an amazing coaching staff here and I am looking forward to the season.

Coach Flores was born and raised in New Braunfels, TX. Flores graduated from Canyon High School in 2010 and from Texas State in 2014 with a Bachelor's degree in Exercise Sports Science. Flores is beginning his 8th year with SMCISD. He taught 4th grade for one year & PE for four years at Bowie Elementary. Coach Flores will be returning for his second year at SMHS to continue teaching P.E. and coaching boys basketball. All in all, he has coached youth boys basketball for 7 years at the high school, middle school and elementary level. When he is not coaching, you can find him working on old Chevys or spending quality time with his family by the river.

Coach Hester was born and raised in Huntsville, TX. Hester is a recent LeTourneau University graduate. He earned a Bachelor's in Kinesiology while playing four years of collegiate basketball at LeTourneau University. He was a captain his senior season and coached by Coach Miller. Hester is looking forward to this first year of coaching and will also be pursuing his Master's at Texas State University. 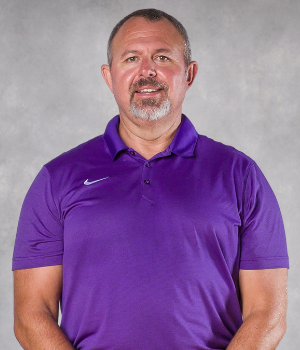 Coach Martinez has been coaching high school tennis for 10 years with the last four at San Marcos High School. He played tennis at St. Marys University. 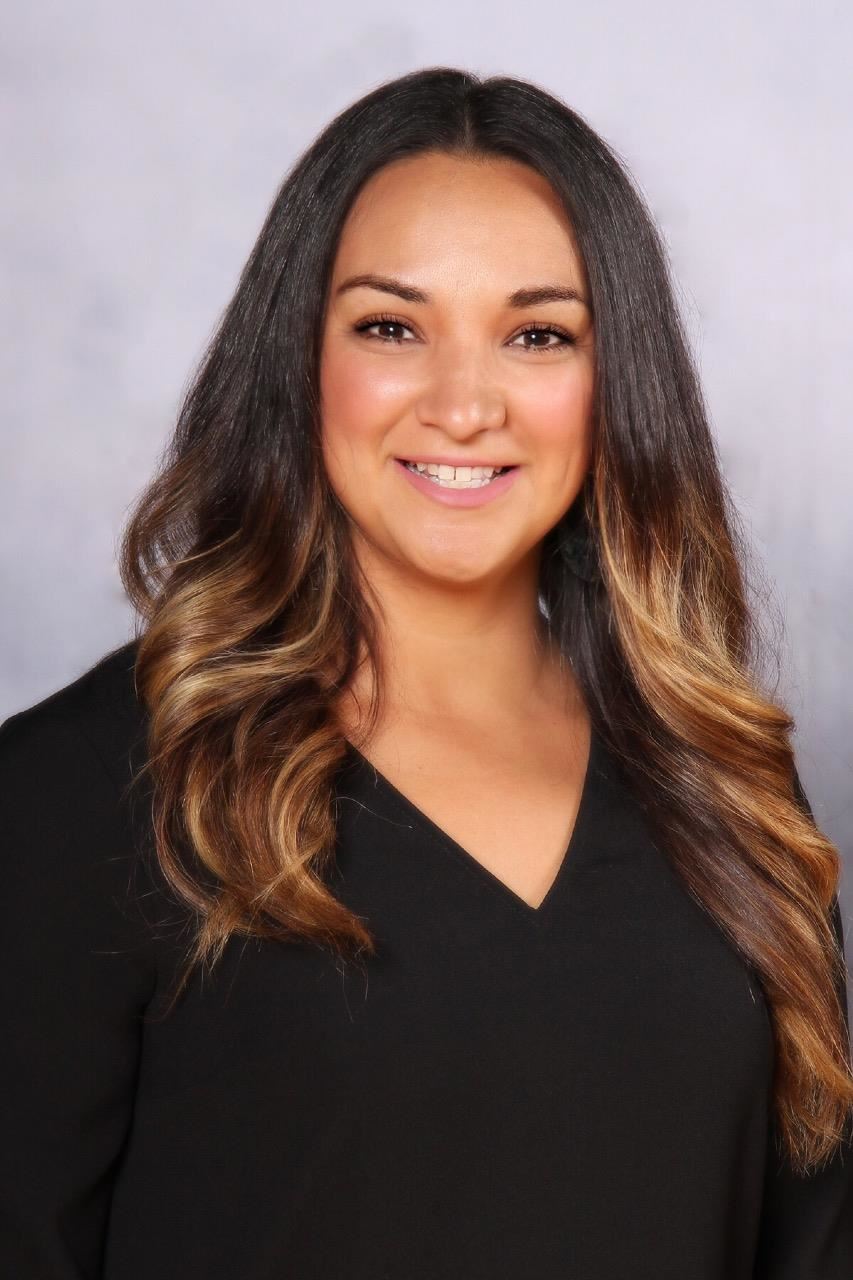 Hello, my name is Marissa Mendoza.  I am from Laredo, Texas where I grew up around sports all my life.  In high school, I played volleyball, basketball and track and field.  I decided to continue my career in Track & Field at the collegiate level at the University of Texas Pan American for three years and then transferred to Texas State University.  I graduated with a bachelors degree in 2009 in Exercise and Sports Science with a minor in Rehabilitative Services.  I am excited to be a part of this program and strive to be a positive role mode for our athletes. 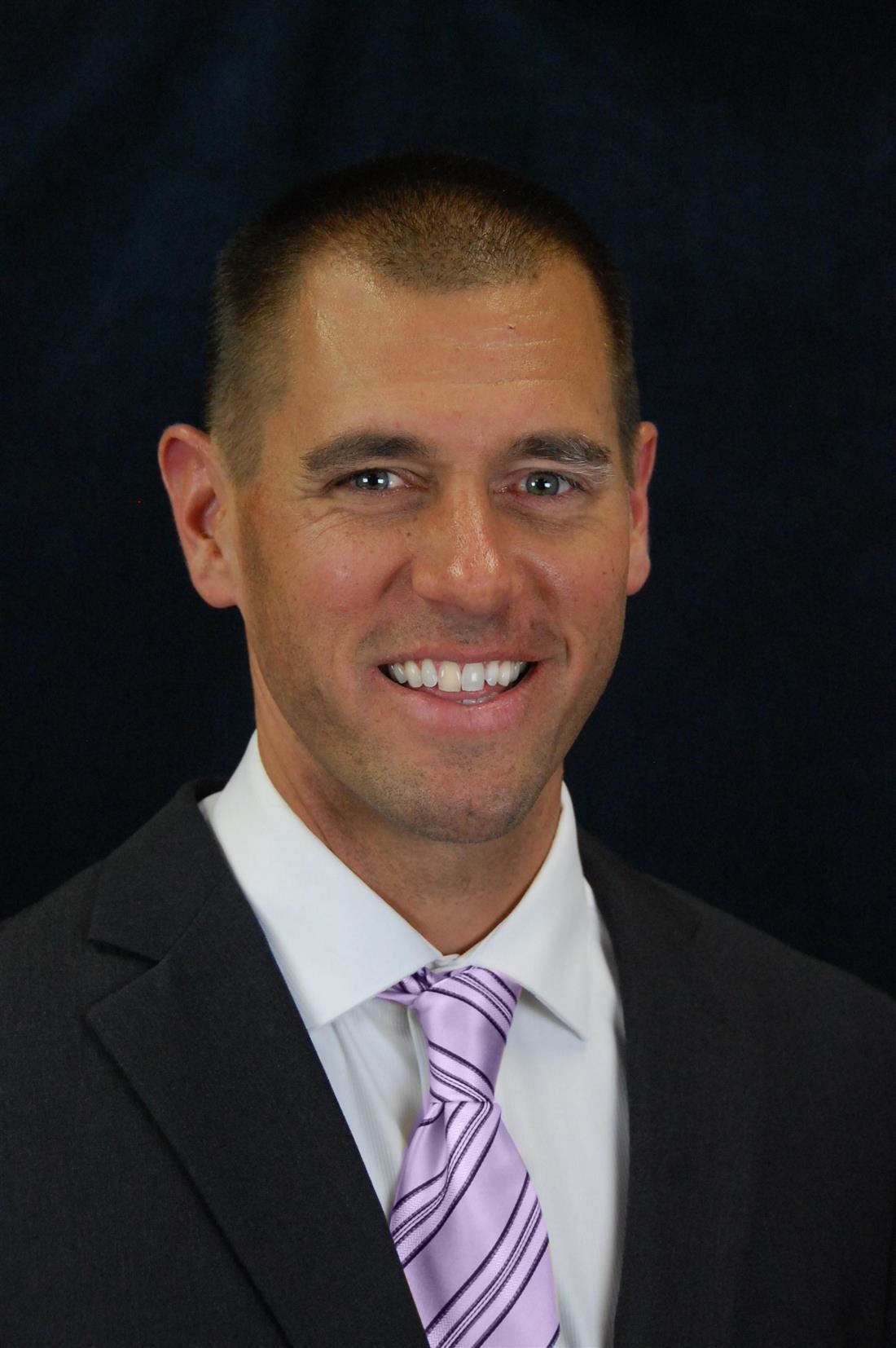 Coach Miller comes to San Marcos after spending seven seasons as the Head Basketball Coach at LeTourneau University. Miller guided the YellowJackets to five straight winning seasons, the school’s 1st ASC Championship, 1st NCAA Tournament (x2), and became the school’s all-time leader in wins. Prior to LeTourneau, he was the Head Basketball Coach at Katy Seven Lakes where his teams won four District Championships, seven straight playoff appearances with at least one win, and two regional appearances. Coach Miller is married to Monica, an English teacher and they have three kids, Kayla who graduated from UT-Dallas and lives in Dallas, Kyren who attends UT-Tyler, and Kayden who will attend Texas State University. When Miller isn’t coaching basketball he loves spending time with his family and rooting for the Green Bay Packers!

Hello! My name is Michael Morris and I am the head cross country and assistant track and field coach at San Marcos High School. I went to Texas State University and was a 4 year athlete competing on both the cross country and track teams. I specialize in long distance running, but that is not where my passion stops, I love everything about running. At Texas State I earned a place on the cross country and track all conference teams, and set a school record in the 3000m steeplechase. I have been at SMHS for the past 6 years and have loved my job and the students that I get to work with on a daily basis. I became the head coach of the cross country team in 2016 and have been trying to spread my passion for running to student athletes! Our goal, be better than you were yesterday and to always compete against yourself.

Coach Sambrano is entering his 4th year of teaching and coaching. This is his first year at San Marcos High School. He attended college at Texas State University and received a Bachelors in Exercise and Sports Science with a certification in History. He currently teaches 10th grade Pre-AP and Academic World History at the High School. He is very proud to be back at his Alma Mater and cannot wait to see Rattler Nation reach new heights. 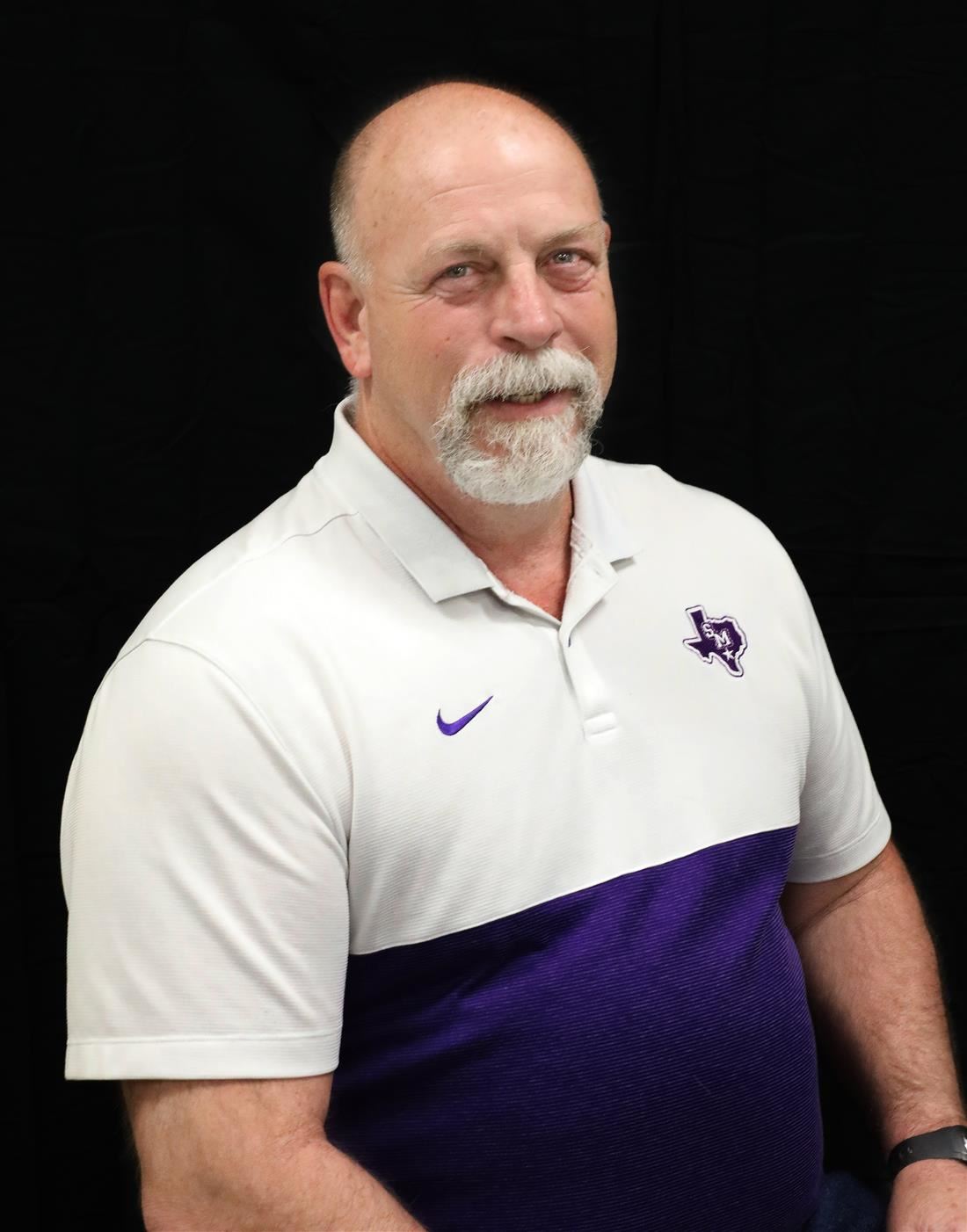 Coach Garvin Smith is a Health Science and Technology teacher here at San Marcos High School.  He joined the Health Science team, adding 27 years experience in Chiropractic and Acupuncture to an already outstanding staff and program at our school.

Coach Smith is dedicated to improving on the already strong start of the San Marcos Wrestling Program. With plans to implement a sound feeder program from the younger kids  to insure the creation of a wrestling powerhouse for the state, right here at San Marcos High School.

Dale Stonecipher was born in Indiana, and grew up where they filmed the movie Hoosiers.  Dale’s dad was a farmer, where he learned very early about hard work and why he should go to school.  He moved to Texas at the age of sixteen and graduated High School from Dalhart, Texas.  Upon graduation from High School he attended Wayland Baptist University majoring in mathematics and physical education.  After finishing his undergraduate degree, he stayed at Wayland and received a Masters of Business Administration degree.

Dale then moved To Dallas where he worked for Automated Data Processing and married his wife Ronda, who is also a teacher.  Then twenty-eight years ago they moved to the Lubbock area, where two children were born Kelsey and Ty.  Dale coached and taught mathematics at little six-man football schools.  During this time he completed his mid-management certification at Texas Tech.  Upon completion of his mid-management certification his family moved to the San Marcos area.

Dale has had such interesting jobs as a truck driver, sanitation department, computer programmer, teacher, coach, assistant principal and principal.  He has taught math at every level from seventh grade to calculus.  He has coached everything from football, baseball, track, tennis, golf, basketball, cross country and softball.  This is his tenth year at San Marcos and he is having the best time of his life.  Dale has received the Most Valuable Coach Award for National Girls and Women in Sports Day from Texas State.

Cathy Stoughton is in her 25th year of teaching and coaching, and her 21st year of teaching and coaching at San Marcos High School.  Coach Stoughton is a graduate of Texas Lutheran University with degrees in Mathematics and Kinesiology and a 1993 graduate of San Marcos High School where she played volleyball, basketball, and softball, and played the trumpet in the Rattler band, while being a member of the UIL Math team.

While at SMHS, Coach Stoughton was an All-Central Texas softball player, and member of the Rattler 1992 State Champion and 1993 Region Semi-finalist basketball teams and the 1993 State Semi-Finalist softball team. In 1993, her San Marcos Big League team won the State Championship and finished two games away from the Big League World Series. She was also a member of the All-Region Band and advanced to UIL Math Regionals.

In her SMHS coaching career, the Lady Rattlers have made fifteen playoff appearances, including capturing three District Championships, nine Bi-District Championships, two Area Championships, and one Region Finals appearance. Thirty-seven Rattler athletes have received college scholarships during her tenure. In 2014, Coach Stoughton was named Central Texas Coach of the Year by the Austin American Statesman and San Marcos Daily Record Coach of the Year. She was also selected to coach the Central Texas Senior All-Star game South team at Westlake High School in 2015. In 2021, Coach Stoughton was selected San Marcos High School Teacher of the Year. She currently teaches Geometry.

In her spare time, Coach Stoughton performs in the SMART Orchestra, and she recently completed her first triathlon. She is in her final year of study for her mathematics education masters at Texas State University. She and her husband have a 10-year daughter and 8-year old son, and she enjoys spending her time off with her family. 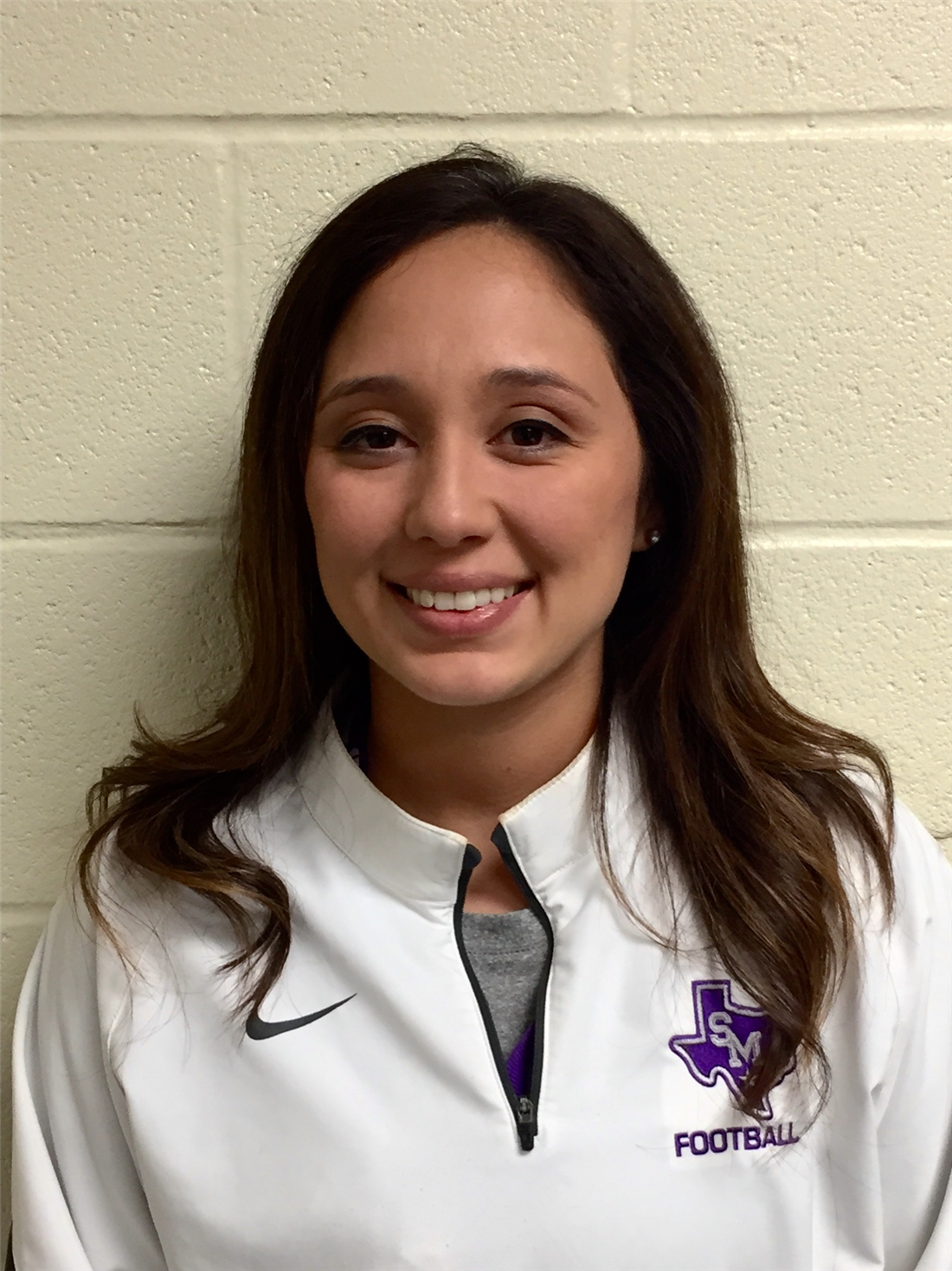 Tristen is currently in her 5th year at San Marcos High School. She is originally from Cotulla, TX and then moved to attend college at Texas State University here in San Marcos. She earned a Bachelors of Science in Athletic Training from Texas State in 2012. While there, she had the opportunity to intern with the volleyball, football, soccer and baseball teams as a Student Athletic Trainer. She also earned a Masters of Science in Kinesiology from the University of Texas at Tyler in 2013 while working as the Athletic Trainer for The Brook Hill School in Bullard, TX. She also became a Certified Sports Medicine I and II Instructor in 2014. 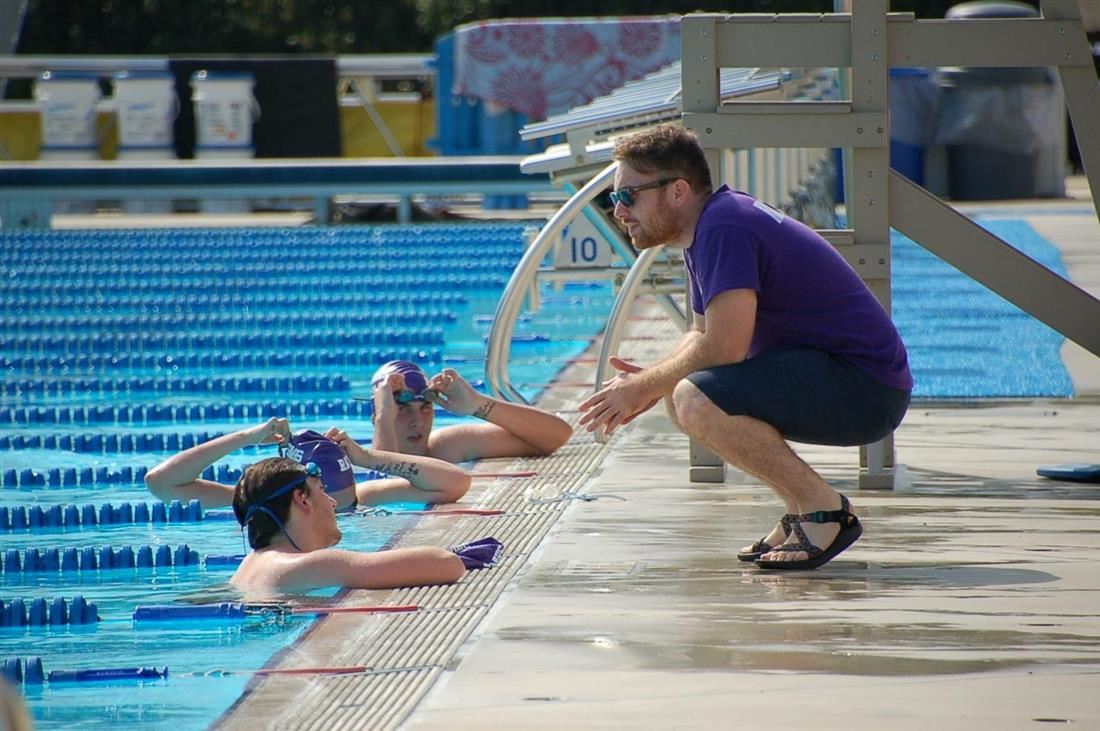 I began my career at San Marcos High School in 2015. Most of my life has been spent around the world of swimming. As a Rattler Coach, I believe in holding our athletes to the highest of standards and expectations in the pool, in the classroom, and in the eyes of the public. Swimming is a sport that not only fosters competitive spirit and builds every muscle in the body, but it also encourages life long self discipline. The San Marcos Rattler Swim Team is a family of high performing student athletes. 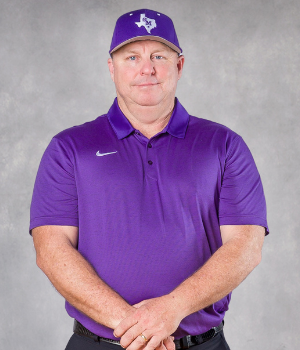 This is my 13th year at SMHS. Overall I have 21 years of experience (19 as head coach).  I have been married to wife Britney for 19 years and have 3 sons (Gunner, Kannon, and Kutter Gage) that all attend San Marcos schools.  Go Rattlers!

I am originally from San Antonio, Texas and graduated from Judson High School in 2011. I relocated to San Marcos to attend Texas State University. I earned a Bachelor’s Degree in Exercise and Sports Science. I taught 7th grade science at Goodnight Middle School for 2 years. I also started the XC program and coached basketball and track. I transitioned to the high school where I will be co-teaching English III and coaching Freshman Volleyball and Basketball. Go Rattlers!!!